My Body is Unfit,  My Mind is Lethargic Like the soul Of  Human Kind!

But when together and healed, They become one Unit, Unified and Sanctified Before The God of All.

The picture Below is of The Apostle Thomas, which Christian Belief Branded the  Doubter! as he, Did  not Believe In the Res-erected Body of Christ as neither would I 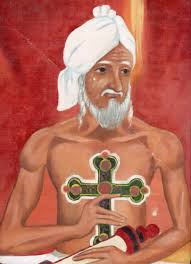 That is,  Believe in a Murdered Body Coming out of A tomb.  The Tomb’s Door is Rolled back, & then A Zombie Appears!! ahhhh!! by Jings I would run a Mile! But, Take away the Zombie Part & you have A belief Central to Christian Belief a.k.a “Dogma”

That, the Body is Healed after You physically Die. And you will Be in the Park no doubt Lighting up a smoke, or trying to kill yourself again, maybe even with your old Sunglasses on, No doubt getting some sun, you would need it after, dying and laying in a coffin for a little while.  Also it begs the question that has “no Doubt” been asked Millions of time! What happens if your Cremated?? maybe then it is just a Bob Dillon thing a blowing in the wind.

Thomas was no Fool,a conclusion you would come to if you had ever read any of his now available texts some of which The early Vatican Denied existed.
furthermore, you just have to read The Gospels that were written by him or, are accredited to Thomas. You will read of a Man who Had a Great Understanding and a Deep Meaningful Relationship with Jesus! He was also Known as the “Twin” Twin of Who?
furthermore, He was Known to be a scribe,  a scribe for who??  also Jesus Takes him aside, and Tells him something That was not for the ears of the other Disciples!
So, Just by that action alone, would indicate He was thought Highly of By, Jesus.  Yet very Little is written, which  is said by him, in the “Governmental”   (for lack of a better word)  issue of the Bible…strange?

However! as the story goes. When Thomas Meets the Newly risen Christ he believes, but, wait!! … after he pocks his fingers through The wounds of Christ! Now think about this.?  If the Body was still Functioning, as is Claimed? or is it just Believed? wait! hold on a minute!… as Their in-itself are two Different Thoughts!.  For example, I can claim to be The second Coming, secondly, i do not even have to believe my Claim! I just claim to be! Why? ..because i can Speak.  Thirdly, “You” Do not have to Believe it! … or guess what, you can!  or fourthly you can go out and claim to be The Second Coming yourself! AND BELIEVE IT!

There seems to be a danger here! The Danger is Claiming a belief

For, when you try and Combine, a Claim with a Belief? as remember both These words are as Different  as is Chalk & Cheese! But it seems? that Religious People are fooled into Believing That these two words Mean the Same!  You cannot believe the Claims  of other Men, why, because People Lie, for there own power of self, ego & Greed.  “Is it not better to know the truth”? rather than just Believing something! Because you are told so!?

People lie! it sucks but we do! why? there are  so many reasons. but the one rational i like to hang on to is that most folks do not want to look like the Bad One!the rotten apple to use a biblical pun!
They THE INFAMOUS “They” say History is written by the winners!!I digress!Any ways The catholic Church has been hanging on to the Literal Meaning of things for so long they Probably believe it themselves! or do they??
It would seem to myself That Thomas did not Believe in the Earthly Resurrection of Christ!          and he was right in doing so! for he believed in the Spiritual Resurrection of the  Body which is completely different to the Zombie Christ.. which, with an reasoned mind, one would assume!

Thomas was wise, so wise, that he was meant to of, traveled to India, with the Teaching and Baptism he received from Christ! why to India why indeed?

I have read of a wise man once stating That India is a very tolerant country, and as a rule of thumb if a Person claims to be a Holy man, well! they Just leave them to it.. why? well Just in case they are!

If you look at the first picture, you will see Thomas  holding the cross upon his own Body. He knew that His own Body and mind were the doorway to the Temple of his own Salvation He had been taught redemption By his Teacher, Jesus The great Sage!

The Catholic Church however, told it  in a way Of spin! Reinforced through the  dark ages with the minds of the spirituality ignorant and the uneducated mind of the Poor!

And hence forth they Ruled along with the elite!
Why do politics & religion go hand in Hand!??
i will end on a positive note!
we are waking up! like a slow slumber we have been sleeping for hundred, if not a thousand years
we are questioning,  and understanding slowly!
Napoleon once said about china “That it was a sleeping giant”
He was only capable of thinking about territory.
a great chess player? a’k’a A Playa
But Jung was closer when he said about humanity
“we are the collective unconsciousness “
so i guess one could reason, that when we are all awake, spirituality speaking
our consciousness will be as one!
and so will our hearts!

About Unity and Equality

I have lived very Little and compared to many I have Lived Alot and It is less about me and more about our Brethren and Sisters in a nut shell Humanity. Poverty is not just about the Bank balance but the many levels of poverty that exist from a lack of education. And how to be Guilt Free, not to feel shame or embarrassment and in constant doubt learning to tear Down Walls that Separate Society. One Child Starving in The World that we call Home Is One Child to Much. Ignorance is the enemy of people as is doubt and insecurity the enemy Of Humanity. We need to break free from the shackles of ignorance and seek out The Freedom of Spirituality, The God Head that exists within us all. " The Kingdom Of Heaven is found from within" for we are both Key and Door.
View all posts by Unity and Equality →
This entry was posted in God, Judgement, Mind, Philosophy, Politics, Religion, Society, Spirituality, Thought, Uncategorized and tagged Catholic Church, Church, Gospel, Jesus, Resurrection of the dead. Bookmark the permalink.